Nothing is forever,  except EXTINCTION.

The Black Rhinoceros or hook-lipped rhinoceros (Diceros bicornis) is an endangered species and is so severely in conflict with humans that it is on the point of extinction in our lifetime. It is largely in peril because of deep rooted misplaced believes and greed that fuel the demand for rhino horn. Poaching is on a highly organised global scale and an extremely lucrative business, making the prospect for survival very slim. The value of rhino horn continues to outstrip that of gold and cocaine – what hope does the Black rhino have?

How many Black Rhinos are left?

The Black rhino is classified as a critically endangered species, and one subspecies, the western black rhinoceros was declared extinct in 2011. The IUCN believed there were 5055 Black Rhino left in the world in 2012. 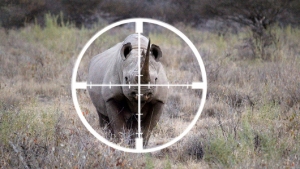 The Black Rhino is native to eastern and central Africa including Kenya, Tanzania, Cameroon South Africa, Namibia, Zimbabwe, and Angola. Although the rhinoceros is referred to as black, its colours vary from brown to grey. Changing deep seated cultural beliefs to stop the demand for rhino horn takes generations and time is running out. Tourism and protection is the only hope for the Black Rhino’s continued existence. 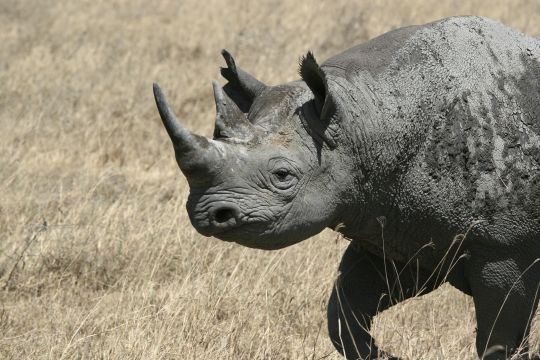 An adult black rhinoceros stands 132–180 cm high at the shoulder and is 2.8–3.8 m in length, plus a tail of about 60 cm in length. An adult typically weighs from 800 to 1,400 kg, however unusually large male specimens have been reported at up to 2,199–2,896 kg. The females are smaller than the males. Two horns on the rhino’s skull are made of keratin with the larger front horn typically 50 cm long and exceptionally up to 140 cm.

The longest known black rhinoceros horn measured nearly 1.5 m in length.  Sometimes, a third, smaller horn may develop. These horns are used for defence, intimidation, and digging up roots and breaking branches during feeding.  It and has a pointed and prehensile upper lip, which it uses to grasp leaves and twigs when feeding.

There is some variance in the exact chemical composition of rhinoceros horns. This variation is directly linked to diet and can be used as a means of rhino identification. Horn composition has helped scientists pinpoint the original location of individual rhinos, allowing for law enforcement to more accurately and more frequently identify and penalise poachers.

Rhinos have been around for millions of years and play a crucial role in their ecosystem. They’re important grazers, consuming large amounts of vegetation, which helps shape the African landscape. This benefits other animals and keeps a healthy balance within the ecosystem.

As one of Africa’s ‘big five’, rhinos are an iconic species for tourists, who by their very presence help to protect the species. 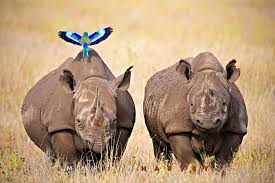 How the Black Rhino live:

Generally they are thought to be solitary, with the only strong bond between a mother and her calf. In addition, males and females have a consort relationship during mating, young adults frequently form loose associations with older individuals. They are not very territorial with the availability of food and water being more important.

Black Rhinos have a reputation for being extremely aggressive, and charging readily at perceived threats. They have even been observed to charge tree trunks and termite mounds. Black rhinos will fight each other, with the highest rates of mortality in combat of any mammal –  about 50% of males and 30% of females die from combat-related injuries.  Adult rhinos normally have no natural predators, thanks to their imposing size as well as their thick skin and deadly horns. 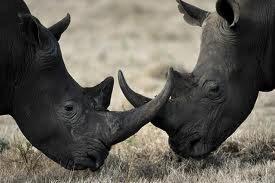 Interesting Facts about the Black Rhino: 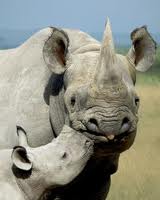 Humans are the only threat to Black Rhinos, with illegal poaching, habitat loss and civil war topping the list.

Illegal poaching for the international rhino horn trade is the main and most detrimental threat. It’s a highly lucrative, organised and corrupt market. The Chinese have hunted rhino for their horns since 1200 B.C, when rhino horn was used to make wine cups and the skin to manufacture imperial crowns and belts and armour for soldiers.  The horn is also used in traditional Chinese Medicine and is said to be able to revive comatose patients, facilitate exorcisms, cure fevers, and aid male sexual stamina and fertility. Another major market for rhino horn is for making ornately carved handles for ceremonial daggers in the Middle East. It is believed the increased demand  between 1970 and 1992 from the Middle East caused the black rhinoceros population to decline 96%. Black rhinos are also hunted for the superstitious belief that the horns allow direct access to heaven due to their unique location and hollow nature.

The number of rhinos poached in South Africa alone has rocketed in the past seven years – from 13 in 2007 to 1,004 in 2013. This recent surge has been primarily driven by the demand for horn by upper-middle class citizens in Vietnam. As well as its use in medicine, rhino horn is bought and consumed purely as a symbol of wealth.

International commercial trade of the Black rhino horn has been prohibited since 1977, however the trade persists.  Protecting rhino’s in their natural habitat is costly.  Whilst tourism can help fund the management of parks and armed guards, protecting the Black rhino is a dangerous job.

An article the FT.com on 3 October reported the effects of,  “a precipitous drop in Kenyan tourism due to terror attacks by the Al – Qaeda – linked militants” as having undermined costly anti -poaching efforts.  Of the “big five” rhino are the hardest and most expensive to protect, costing $20m a year across the county’s 15 rhino sanctuaries.

Some conservationists are taking drastic measures – removing rhinos from their natural environment, and even removing their horns so they have no value to poachers.

Most conservationists and operators of private game reserves value the role tourists play in the long term survival of endangered species. They provide a revenue stream and local employment, as well as a visible presence, all of which are deterrents to poachers. 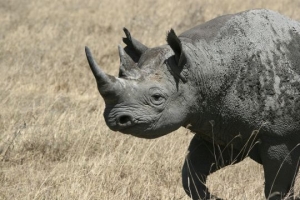 How you can help play a key role in the long term survival of endangered species:

Participate on joint-venture conservation safaris that directly financially support wildlife charities who have endangered species conservation programmes.You get what you pay for –  you will get an all encompassing wildlife experience and an insight into how conservation really works in the field, as well as helping with the long term survival of endangered species . You will meet the individuals who are fighting extinction. Pioneers of the joint-venture conservation safari for over 10 years is niche travel events company Spencer Scott Travel.

"Thank you for all the organisation which gave us such wonderful and thrilling days in The Mara - a truly memorable experience.  We were so lucky all our sightings - the best view of leopard I have ever had.  The bonus was that beautiful black rhino - fighting fit and so close.  Of course, Simon's expert and enthusiastic guidance ensured the maximum benefit."
Angela
The Mara with Simon King
"I love working with Spencer Scott because I can be confident that, wherever we go, the Company will have secured the best available accommodation, services and back-up. This frees me to concentrate on what I enjoy most, which is finding really special wildlife experiences to share with our clients"
Stephen Mills
BBC Wildlife
""We had so many different experiences, the accommodation was all excellent and very varied.  Our viewing of the wildlife was exceptional, and we all managed to complete several paintings and sketches of animals, birds and landscapes.  As always, Hazel was an inspiring teacher."  "
Eileen
Paint in East Africa with Hazel Soan