Tigers are the most magnificant of the ‘big cat’s. They are elusive, graceful and clever. Legends of folk lore and tales of magic, contradict and over-shadow the truth about the tiger. 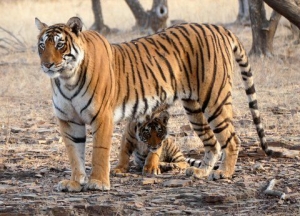 The scientific name of the tiger is Panthera Tigris.

The current world population of tigers is estimated to be just 3,900. Tigers are on the endangered list. Human encroachment, poaching and de-forestation are the main threats to the tiger.  Controlled tourism can help protect the tiger merely by having a presence and by monitoring individual tigers.

The criteria for identifying subspecies are controversial so numbers quoted range from 3 to 9.  The Russian Far East tiger is bigger, the Island tiger is the smaller with more – stripes and the rest are pretty similar, but the 9 subspecies list is: Bengal, Siberian, Indochinese, Malayan, Sumatran, South China, Bali, Javan and Caspian.  Sadly the Bali, Javan and Caspian are classed as extinct and there are fewer than 30 South China tigers reportedly remaining. 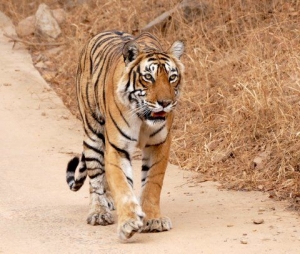 Seeing a tiger in the wild is one of the most exciting and memorable sights you can encounter. Their colour and size takes your breath away. Whilst to the untrained eye they all look the same, every single tiger has its own unique pattern of stripes and marks.  These patterns can often be recognised in the field by experienced observers but they are particularly important when camera traps are used. These are cameras hidden in the jungle that allow passing tigers to take their photos. The frozen images allow researchers to analyse the stripe patterns in detail so they can nearly always make an accurate identification, even when they wouldn’t have been 100% sure if they’d just spotted the tiger themselves. In the last Indian tiger census the authorities deployed nearly 27,000 camera traps and the data from these allows us to be more confident of the population estimate. 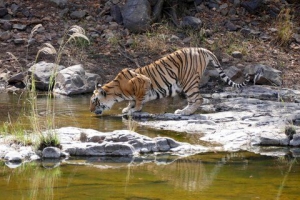 Contrary to general assumption tigers are not territorial. They have regular home ranges in which they practise spacing exercises, such as scent marking. These tell other tigers when and where they are moving, allowing some degree of overlap of land use while minimising contact and conflict. The scent carries detailed information. So if a tigress is coming on heat she may wish to increase contact with a male and rule out females. Male home ranges are on average 3 times larger. This is because adult and subadult male mortality is precisely 3 times greater.  This is because females settle in or close to their range where they were born and where they learnt to hunt.  Males on the other hand have to disperse for reasons of genetic diversity and so give up the hugely important asset of knowing the hunting grounds, which ultimately costs most of them their lives. The Tala ranch in Bandhavgarh had a population of 29 tigers including cubs a few years ago. The range is only 109 sq km, so exclusive territories would have to be tiny. Instead it was found that the tigers spaced themselves in tine as well as place, very much as domestic cats do in fields. 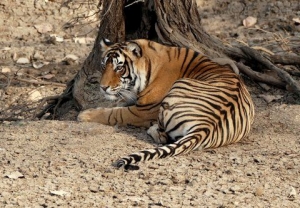 Tigers do fight each other but it is not believed to be over territory, unlike hyenas, which kill each other if they cross over a marked boundary. Male tigers fight for mating rights when a female comes in oestrus. It is thought that females fight over hunting rights. So if a Mother meets her long lost daughter hunting along her favourite river she’ll fight. But she won’t wait all day to ambush her daughter because she thinks she is on her land.

Tigers make a successful kill once in about twenty attempts. They can eat 80 pounds of meat in one sitting and they need to eat at least once every seven days. This equates to at least 52 sambar deer a year. 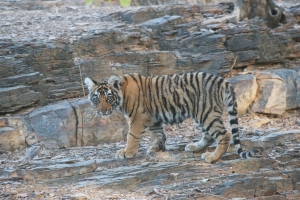 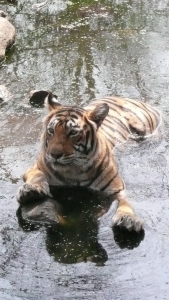 The gestation period for the tiger is around 103 days.  Tiger cubs don’t open their eyes for the first 15 days and they depend on their mother’s milk for at least 3 months. During this time the mother will keep them hidden in a safe place like a cave. The cubs stay with their mother learning hunting and survival skills from her until they are about two and half years old. The mother then pushes them out of her territory to fend for themselves. The life expectancy of tigers in the wild is 10 -15 years.

Tigers are elusive and difficult to find when on a safari if you don’t have an expert naturalist with you, but they can see you. Tigers have enhanced vision and can see six times better than humans. This should be a warning to anyone leaving the safety of the jeep! 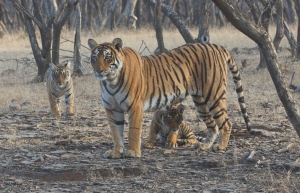 India has around 50 tiger reserves and is one of the best places in the World to see tigers.  Spencer Scott Travel teamed up with Stephen Mills almost 30 years ago and together they have hosted dozens of exclusive tiger safaris – all of them have been successful in finding and seeing tigers. We hope to operate more tiger safaris in the future offering small parties the experience and thrill of tracking and finding tigers in the wild.

""Just wanted to drop you a quick line to say how very much I enjoyed painting with Pete in Havana.  I loved it all, the City, the painting, the company, the Mojito's and the food, and it was great to have Jacqueline there organising us all. Many thanks and I hope to take part again next year.""
Karen
Painting in Havana with Peter Brown PNEAC, RBA, PS, ROI, RP
""Thank you Lucy for giving us such a wonderful time. I so appreciated your expertise and your personality. I learned so much and very much appreciated my time painting with you. Eileen's support was wonderful and made everything go so smoothly from the moment we left Heathrow until our return.  I enjoyed meeting everyone and sharing such special times together, both arty and spiritual. This was a trip of a lifetime and I'll never forget it."  "
Marie-Dom
Painting in The Holy Land with Lucy Willis
""I wanted to say thank you so much for everything.  It was the most wonderful holiday and the memories of which will stay with me a lifetime.  It was clear to me that a lot of  work went on behind the scenes by both yourself [Liz Drake and Spencer Scott Travel], and Simon [King]  to make this holiday the very very best one could wish for and so very special so thank you both so very very much."  "
Melanie
African Cats with Simon King