Home / News / Diary of being on safari with Simon King

Diary of being on safari with Simon King 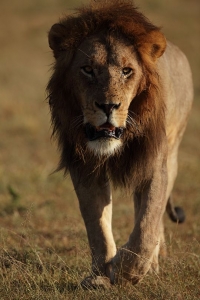 Our magical Mara experienced commenced with a lunch hosted by Simon King and Liz Drake in London at a private members club followed by an exclusive screening of the new Disney Nature film  ‘African Cats’, which Simon helped to film.

The lunch was perfect for meeting each other and breaking the ice and the film gave us an insight to what we could expect to see in the coming days. Simon wanted to show us the locations where he filmed sequences and to introduce and update us on some of the characters in the film.

At the onset it was clear that Simon was going to be the perfect gentleman host and a brilliant, informative and generous guide. He made everyone feel important, at ease and part of his safari family.

It was then straight off to the Virgin Club Lounge at LHR.

The following morning we landed in Nairobi fresh after our flat-bed flight and ready to start our own African Cats safari.   We boarded our private plane without transferring airports and were on our first game drive one hour later! 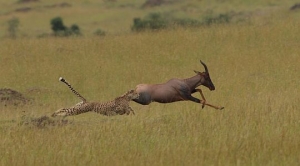 Our first bush camp consisted of 8 tents in a secluded setting lining the banks of the Mara River. Comfortable but not plush, we could relax and be at one with nature. We lunched and dined outside under the shade of the trees and in candlelight, being entertained by our hippo neighbours and went to sleep to the sounds of the bush – leopards, elephants, hyenas and of course the hippos. Our days started pre-dawn and we would spend hours observing the dramas of the disparate Marsh Pride as they unfolded before us, the antics of a herd of bachelor giraffes, the family dynamics of a herd of elephants when a juvenile male misbehaved within the group! 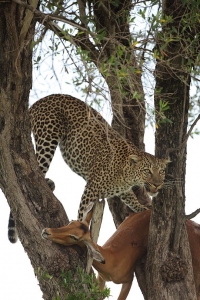 Simon would explain the behaviour and predicted the consequences, providing a valuable insight and better understanding of their world. Simon’s knowledge is extensive; he could always identity species – birds, insects, reptiles, mammals etc – and explain in depth their behaviour, far transcending the information the local guides could provide. With Simon as our guide we spent quality time waiting and watching  – sometimes we sat for hours amidst herds of wildebeest just listening to them and being mesmerized by their constant  restlessness and forward march, or watching the young male lions befriending females  or groups of lions just sleeping.  We even saw one young male trying to befriend Bibi.  We sat with White Eye for a long time. We waited patiently and were rewarded with leopard sightings of Olive and her two boys! 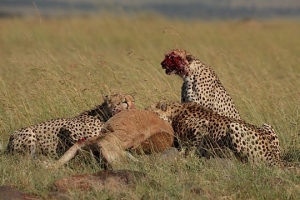 Other vehicles would congregate around us but move on after 5 or 10 minutes not understanding what was captivating us. But these were some of the characters Simon has been filming for years and knows well and the ever changing pride dynamics was utterly riveting.  Little did the other guides and their guests know what they were missing! We’d reluctantly return to camp some 6 hours later.

Sometimes we’d stay out and have lunch in the bush returning to camp in time for a quick shower before heading back out again to witness the stirrings as dusk fell upon the plains.  The adrenalin and wonders of The Mara kept the pace going and time flew by. Before we knew it the sun had set and darkness was upon us.  It was time to head back to the campfire for more tales from our wildlife film-maker extraordinaire, and boy can he tell a good story!

Our second bush camp excelled expectations of luxury with even a Victorian bath in the bush! 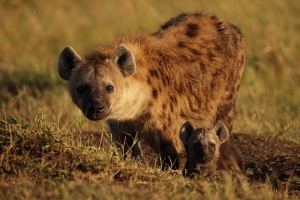 The wildlife experiences kept rolling in with the chance of walking with two protected wild black rhino, night drives with spotlights, witnessing the decimation of a wildebeest by 30 or more vultures, the first wobbly steps of three tiny leopard cubs, the spectacular dispute between two hyena packs where over 70 hyena played out their strategies pushing each other backwards and forwards until they agreed on the new boundary.

All this wild excitment was interspersed with reflective moments like our champagne sun-upper, fun times with sun-downers on the plains, a champagne balloon flight and our very own  ‘out of Africa’  black tie bush dinner on the river bank.  Simon was definitely our Denys Finch Hatton!

Our last African sunset…… We couldn’t bear to leave The Mara without one more chance of seeing those three tiny leopard cubs, so we broke camp early, forwent breakfastand even changed the airstrip from which to fly back to Nairobi (one of the many benefits of having you own private plane!). This gave us a precious and memorable 2 hours with the cubs before having a tailgate breakfast on the airstrip just as our plane landed – perfect timing and a perfect end to a perfect safari.  That same evening we were tucked up in our own beds at home in a different world and with a different family, but this was a safari to dine out on for eternity. Simon &The Mara had worked their magic. 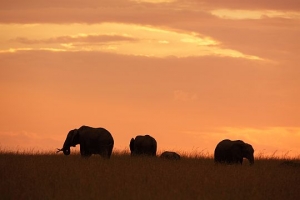 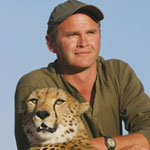 ""Our group is led by Professor Claudio Sillero....his decades of experience in this region and his hardy colleagues, guarantee sightings of wolves  They do not disappoint." "Next we climb up and across the Sanetti Plateau through unmatched beauty in every direction.  Small klipspringer, antelopes and hyrax, ( a pint-sized relative of the elephant), dot the hillsides.  our camp site is magnificent!  It is surrounded by towering basalt formations the locals call 'the soldiers.'  ....Can any place be more perfect?" "Our successful adventure is coming to a close, but we have been fortunate to site 30 wolves in 11 different packs, which equates to 10% of all the wolves living in the Bale Mountains National Park." "
Nancy Gibson
Wolf Watching with EWCP
""Ken was so kind, helpful and enormously interesting to be with. I know I have gained a great deal from the experience of some of his incredible wisdom and insight and having the privilege of working alongside such a great artist""
Ali
Paint in Santorini with Ken Howard
""We had so many different experiences, the accommodation was all excellent and very varied.  Our viewing of the wildlife was exceptional, and we all managed to complete several paintings and sketches of animals, birds and landscapes.  As always, Hazel was an inspiring teacher."  "
Eileen
Paint in East Africa with Hazel Soan