Syria remembered by a group of artists – Painting in Syria 2010

Syria and it’s capital city Damascus, played an important role in the history of mankind – it was one of the oldest civilisations in the world, home to the Biblical rivers Euphrates and Orontes, it was the birthplace of the alphabet, it traded with the Roman Empire and was on the Silk Road to China, it was on the pilgrim’s road to Mecca and Lawrence of Arabia and Richard Burton travelled along the road to Damascus. Most importantly Syria had been a country of tolerance for centuries, where Jews, Muslims and Christians lived peacefully together. It no longer is.

We organised a painting holiday to Syria in 2010 for a party of artists. Their experience and portraits of Syria are one of the last records of Syria. 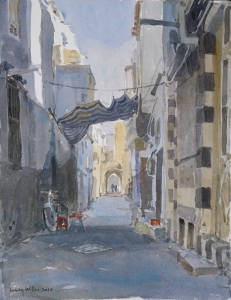 Back Streets of Damascus

Although settlement dates back to 15th century BC the Old City’s character is essentially medieval Islamic. It remains untouched from that time to an astonishing degree.  From our hotel we enter a labyrinth of lanes with mosques, madrassas (Koranic schools) and souqs.  Damascene houses are traditionally built behind high walls around elaborately decorated courtyards and we were granted access to some of these beautiful buildings and courtyards.  The Old City’s romantic notion of The Orient still prevailed and the tradition and art of storytelling best known in A Thousand and One Nights could be enjoyed in some of the city’s coffeehouses.

We left Damascus and drove northwards to the foothills of Jebel Libnan ash-Sharqiyya and the enchanting village of Maalula. Yellow-stone and silvery-blue painted fairytale houses clung to the sheer cliff.  We spent time painting here and at the nearby Convent of St Theda and St Thecla Gap, which resembled the famed siq at Petra. A little further on was the Monastery and Church of St Sergius and ancient cave dwellings. We enjoyed a picnic lunch in the area before driving northwards to the Biblical Orontes Valley and the town of Hama.  We visited some of the norias, massive wooden waterwheels, that Hama was so famous for, before checking in to the Orient House Hotel, a splendid 18th century property with beautiful ceilings and oriental lamps.

East of Hama were the tiny hamlets of Sarouj and Twalid Dabaghein where people still lived in traditional beehive houses. Gertrude Bell encountered Syrian beehive houses and described them ‘like no other villages save those that appear in illustrations to Central Africa’.

Our next stop was Aleppo. We checked in to the Arabian Nights-style Hotel Dar Zamaria & Orient House. This was a ‘boutique’ hotel comprising several courtyard houses dating from the 17th and 18th centuries. There were very beautiful spacious lounges furnished with traditional textiles and Oriental carpets and popular rooftop restaurant. The hotel was located in the Al-Jdeida Ottoman quarter of Aleppo – a warren of narrow, stone-flagged lanes, which borders the Old City and Citadel. 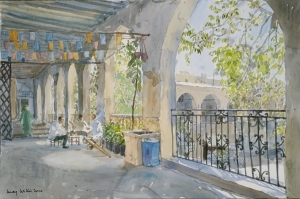 Coffee in the Khan

In the afternoon we took a walk through the ramshackled backstreets of the Bayada quarter to the Old City and Citadel of Aleppo.  Aleppo’s Old City was a World Heritage site and many of the mosques and khans (travellers’ inns) had been beautifully restored.  Aleppo was a key trading post on the Silk Road and it retained the atmosphere of an authentic Arabian bazaar city servicing the local population rather than tourists. Rising up on a high mound to the east of the Old City was the moated and gated Citadel of Aleppo. Inside were paths and steps leading to the remains of the Ayyubid Palace and Mosque of Abraham. Northwest of the Citadel and off the main route back to the Al-Jdeida district was the old neighbourhood area of Farafra with its dusty streets and dilapidated khans, mosques, 19th century soap-making factories, hammams, palaces and a synagogue.

Finally we headed back southwards through the foothills of Jebel Libnan ash-Sharqiyya to the town of Maaloula. We spent our last day painting in the old town and at the nearby Convent of St Theda and St Thecla Gap, the Monastery and Church of St Sergius. 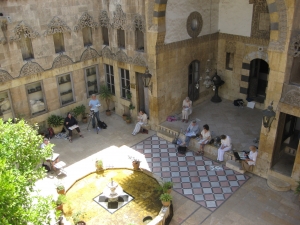 Painting in Syria with Lucy Willis 2010

We returned with wonderful paintings and happy memories that are now tinged with great sadness.

Damascus was magical, Aleppo’s citadel was magnificent and the Syrian people were charming.

Many of the most beautiful buildings on Earth have been destroyed and with every day Syria suffers more devastation and death on a scale it has never before experienced. It is possible to slowly recover from natural disasters, disease and hostile attacks but slaughter by former friends, neighbours and colleagues is the worst and most evil form of humanity that is impossible to recover from. From a country that was a symbol of all that is good about mankind, Syria now shows us all that is bad.

Paintings of Syria by Lucy Willis

""Just wanted to drop you a quick line to say how very much I enjoyed painting with Pete in Havana.  I loved it all, the City, the painting, the company, the Mojito's and the food, and it was great to have Jacqueline there organising us all. Many thanks and I hope to take part again next year.""
Karen
Painting in Havana with Peter Brown PNEAC, RBA, PS, ROI, RP
""I want to let you know that the workshop with Ken Howard in Santorini was simply the best workshop I have ever attended.  I was deeply inspired and impressed by Ken.  The group was a pleasure.  I hope this workshop will be repeated again."   "
Setsuko
Paint in Santorini with Ken Howard RA
""We had so many different experiences, the accommodation was all excellent and very varied.  Our viewing of the wildlife was exceptional, and we all managed to complete several paintings and sketches of animals, birds and landscapes.  As always, Hazel was an inspiring teacher."  "
Eileen
Paint in East Africa with Hazel Soan