Every dog has his day…..

One of those dogs “having his day”  was an injured Painted Dog in Hwange National Park in Zimbabwe called Birmingham.  He had serious bite wounds on his leg which made him unable to keep up with the pack. The wildlife charity Painted Dog Conservation (PDC) based in Hwange National Park felt that to avoid an almost inevitable lion attack, they would capture Birmingham and bring him to their facilities where he could make a full recovery.

He was taken care of at PDC’s HQ and after a full recovery his day came for being released back in the wild and with his pack.

“We opened the crate and Birmingham ran out. He circled around, sniffing the air and hoo * called. Tendai and Argos – two other Painted Dogs, ran over to him and they greeted in typical excited dog fashion with high pitched twittering, the two pups joining in, jumping about all over the place as if they were totally beside themselves with joy”.

* A Hoo call is the sound the Painted Dogs make when they are looking for their pack mates. To read more more about Birmingham sign up for PDC’s quarterly newsletter and check out the PDC Website 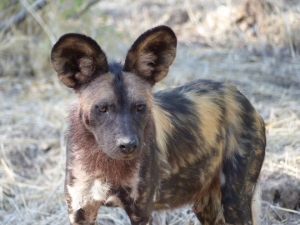 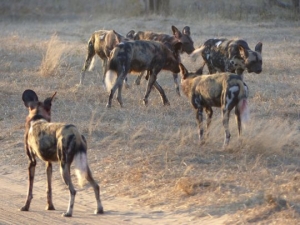 What are Painted Dogs?

Painted Dogs are also known as African Wild Dogs. They are found only in Africa and they are an endangered species. The Painted Dog can be traced back some 40 million years to Miacis, a small carnivorous animal with short legs and a long body. The Civet is a direct descendant from this animal.

It is believed that there are fewer than 7,000 remaining in the wild.  Zimbabwe is one of the “last strongholds” of Afrcian Wild Dogs and this is where Painted Dog Conservation (PDC)  is based. PDC is committed to the long term survival and conservation of this critically endangered species.

In the Executive Summary of the 2014 Annual report, Peter Blinston, MD of  Painted Dog Conservation (PDC),  reported “During the year we received reports of packs in locations that have not seen dogs for more than 10 years, and of packs numbering 20 (including pups) in the Hwange Main Camp area. This is a positive indication that the Painted Dogs are managing to thrive, particularly inside Hwange National Park”.

How do they live?

Painted Dogs are social animals, living most of the time in close association with each other. Pack allegiance, such as pups getting first feed at a kill or members caring for the sick and injured, is an integral part of pack survival.  Peter Blinston writes, “Painted Dogs live in close knit packs, with shared responsibilities for the pups”

A pack is headed up by an  alpha male and female pair. After a gestation period of around 70 days, her pups are born black, with irregular white spots. 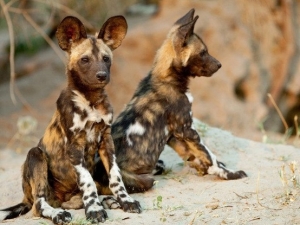 There are usually between 10-11 pups in a litter, each weighing  around 11 ounces.  The pups are nurtured by auntie ‘baby sitters’ for up to six months, when they join the rest of the pack on hunts.

Typical prey for the Painted Dog is medium-sized antelope such as impala, but they have been known to take wildebeest and also chase eland and buffalo, although they rarely kill these larger animals.

Socialisation  which ensures unity between bonded peers and pack leaders.  Research shows that the dogs mourn deceased pack members, which is a sign of emotional ties.  New packs can be created, and the dogs have been seen to adopt new members. 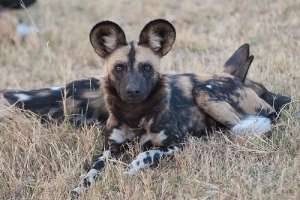 Vocalisation  of an advanced communication of the squeaky, thin call of their voices. It extends into the position of their ears and the message of their body posture. Communication is a vital, unique, and important strength of pack unity.  Remember the Hoo call mentioned earlier?

Hunting methods keep the pack strong. Painted Dogs are among the fastest and most efficient of Africa’s predators, They hunt during the morning, before dusk, and also by the light of a full moon. To avoid the attention of larger predators, the Painted Dog must hunt and eat their kill swiftly. An average adult dog will consume approximately nine pounds of live carcass each day.

What is the biggest threat to the survival of the Painted Dog?

It is man who is the biggest threat to the Painted Dog. The so called “quiet hunters”,  such as ignorance, traps, vehicles, snares set by poachers, and domestic dog diseases are the main culprits.  It has been proven that the loss of just one dog can devastate a whole pack. 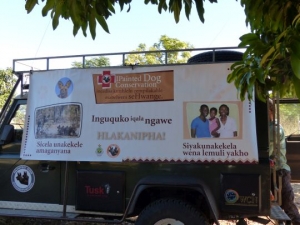 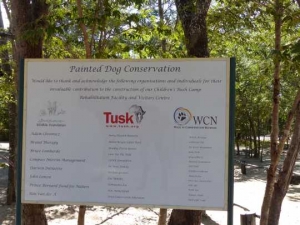 Painted Dog Conservation is based in Hwange National Park in Zimbabwe and is one of the foremost wildlife charities protecting African Wild Dogs. It is headed up by Peter Blinston and Jealous and a team of local experts who have been trained to be guardians of Painted Dogs. Staff act as role models to local communities and a successful education programme is reaching hundreds of school children – the next generation to protect Painted Dogs. TV vet Steve Leonard is Patron of PDC and through his work at Wildlife Vets International he personally conducts bi-annual vaccination clincis out in the bush for villagers and local farmers to have their domesticed dogs innoculated against rabies and neutered, which help to stop the spread of diseases to African Wild Dogs.

Anti-poaching Units
PDC currently has 3 active anti-poaching units which proactively intervene to restrict poachers, including the dismantling snares throughout the territory.

Rehabilitation Facility
To cater for all dogs that need holding while they recover from injuries that they would not be able to cope with in the wild.

Re-introduction Program
In the effort to rebuild weakening gene pools and create healthy packs, PDC oversees the formation of new packs through recovered individuals and orphans.

Pack Monitoring
Pack monitoring enables the project to identify behavior patterns, hunting success and mortality. It also allows makes landowners aware of the presence of the dogs, allowing them to provide accurate information about the dogs to the project

This is an innovative educational bush camp where school children spends several days living at PDC’s HQ’s and learn all bout African Wild Dogs, their importance in the ecosytem, the perils they face and keys community measures necessary to help the sustainable future of the species.The bush camps are a long term investment in the next generation who will play a key roel in future of Painted Dogs in their own environment..

How to get involved?

There are a number of ways, and here are just some:

"I have had the good fortune to work with Liz Drake at Spencer Scott Travel taking small groups on safari to East Africa and India. All aspects of the journey are handled in a most personal, thorough and sensitive way, and all the arrangements are organised with admirable attention to detail. I have always boarded the plane from London knowing we were all going to have the holiday of a lifetime."
Virginia McKenna OBE
Born Free Foundation
"I've done lots of trips tour guiding for Spencer Scott Travel (Cuba, Peru, South Africa, Botswana, Uganda) and they have all been of the highest order, well planned, great itineraries, excellent support and clients always totally satisfied. They are a total pleasure to work for and I have loads of great memories to treasure as a result. Check them out if you want something special."
Chris Packham
Wildlife TV presenter, photographer & author
""I want to let you know that the workshop with Ken Howard in Santorini was simply the best workshop I have ever attended.  I was deeply inspired and impressed by Ken.  The group was a pleasure.  I hope this workshop will be repeated again."   "
Setsuko
Paint in Santorini with Ken Howard RA