Morocco – The Most Exotic Painting Destination Closest to Europe

Travelling for educational and leisure purposes really commenced with The Grand Tour in the 17 & 18th centuries.

Then in the main Empire-building period of the 19th century travelling to new exotic destinations like India and Africa became an adventure for the privileged and very wealthy.

Artists and writers sought out other less expensive places that were exciting and where they could live a bohemian lifestyle. Paris was a popular choice, but those with fewer funds headed further south and eventually discovered North Africa – an exotic land on the other side of the Mediterranean Sea where the cost of living was a fraction of that in Europe. In North Africa they discovered as much colour and spice of life as could be found in India, The Far East or Africa and plenty of magic and mystery too.  Writers, poets and artists started gathering in Tangiers and the Riff Mountains in Morocco –seeking inspiration from a different culture and world.

By the early 20th century, the allure of The Sahara and nomadic desert life was strong, but only a few intrepid writers and explorers like Wilfred Thesiger ventured deep in to the dunes to live with the Tuaregs. Others opted for Marrakech and the Atlas Mountains.  By the late 20th century writers and artists had discovered Essaouira. The first Gnaoua Music Festival was held in Essaouira in June 1988 and since then world music lovers have been coming here. Essaouira is now an established tourist destination for artists, musicians and wind surfers. As a result there is a greater choice of accommodation, but little else has changed in this magical coastal town.

Essaouira appeals to artists because it offers a taste of the exotic and desert life, a sense of adventure, a long history of trading and all the colours and mysteries of another world. It has a relaxed and authentic atmosphere, and the traffic-free old medina that is full of light and charm. There is also a fortified harbour packed with traditional fishing boat and miles of a wind-swept sandy beach.  Above all, the allure of Essaouira is that it is an exotic destination that doesn’t involve flying to the other side of the world.  Essaouira is very accessible being just a 3–hour flight from London followed by an easy 2-hour transfer. 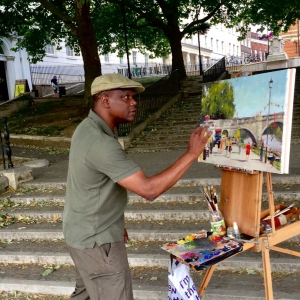 Adebanji Alade, Vice President of the Royal Institute of Oil Painters and ‘artist in residence’ for the BBC’s One Show, is hosting a painting holiday to Essaouira 10 – 18 October 2020. Adebanji is known for bringing a lively sketchy feel to his paintings. His work is inspired by atmosphere, people and mood created by a particular light. Essaouira will provide all this and much more. You’ll receive endless motivation, inspiration and entertainment from Adebanji’s wealth of experience.

""Ken was so kind, helpful and enormously interesting to be with. I know I have gained a great deal from the experience of some of his incredible wisdom and insight and having the privilege of working alongside such a great artist""
Ali
Paint in Santorini with Ken Howard
"I've done lots of trips tour guiding for Spencer Scott Travel (Cuba, Peru, South Africa, Botswana, Uganda) and they have all been of the highest order, well planned, great itineraries, excellent support and clients always totally satisfied. They are a total pleasure to work for and I have loads of great memories to treasure as a result. Check them out if you want something special."
Chris Packham
Wildlife TV presenter, photographer & author
"I love working with Spencer Scott because I can be confident that, wherever we go, the Company will have secured the best available accommodation, services and back-up. This frees me to concentrate on what I enjoy most, which is finding really special wildlife experiences to share with our clients"
Stephen Mills
BBC Wildlife