Painting the Modern Garden: Monet to Matisse Exhibition at the Royal Academy

Monet to Matisse – A landmark exhibition of Garden Paintings:

Starting with the work of Monet this exciting new Royal Academy exhibition ‘Painting the Modern Garden: Monet to Matisse‘ begins on January 20th and will look at the role gardens have played in art from mid 19th Century, through a period of massive economic, social and political change, to the 1920’s.

This unique collection of paintings on display in London features many works from some of the world’s most celebrated artists.

Claude Monet is perhaps the most famous painter of gardens in the history of art. He wrote in 1904, “Aside from painting and gardening I’m good for nothing.”  He also said that he owed his painting “to flowers.” 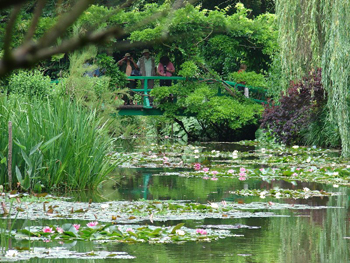 In 1883, he rented Le Pressoir, a long pink house with green shutters and extensive grounds, in Giverny. Initially he did not paint the garden but worked every day on it’s creation, managing much of the labour himself.  In 1890, he eventually bought the property  as he grew in fame and in wealth. He then was able to employ more than half a dozen gardeners and spend money on plants. Monet’s paintings of the Giverny garden are, of course, world famous, but less well known is the artist’s vast horticultural knowledge.

Highlights of the Exhibition

Monet was far from alone in his fascination with the horticultural world. The exhibition will also show masterpieces influenced by gardens from  Renoir, Cezanne, Pissarro, Manet, Sargent, Van Gogh, Matisse, including some rare works from Klee, Klimt and Kandinsky. This is a unique opportunity to see the work of some of the most important Impressionist, Post-Impressionist and Avant-Garde artists.

Over 120 Paintings of Gardens on Display

Highlights include a remarkable selection of 120 incredible paintings of gardens, including 35 works by Monet, such as the monumental Agapanthus Triptych, reunited specifically for the exhibition, Renoir’s Monet Painting in His Garden at Argenteuil and Kandinsky’s Murnau The Garden II. 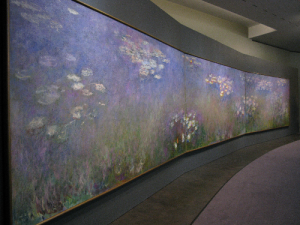 Where and When can you see the Exhibition?

Feel inspired to paint some of the finest gardens in France including Monet’s gardens at Giverny? Then join a special instructional painting holiday with acclaimed artist Pamela Kay NEAC, RBA, RWS, ARWS painting the Gardens of Monet in Giverny and in The Loire , 2 – 10 June 2016. Travel in style by private executive coach, take all the painting equipment you wish, stay in a chateau hotel with its own lovely garden and paint every day with Pamela Kay in a different garden. The final garden you’ll be painting is Monet’s in Giverny. 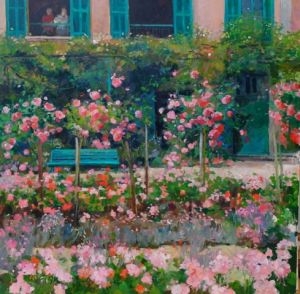 ""Ken was so kind, helpful and enormously interesting to be with. I know I have gained a great deal from the experience of some of his incredible wisdom and insight and having the privilege of working alongside such a great artist""
Ali
Paint in Santorini with Ken Howard
"I love working with Spencer Scott because I can be confident that, wherever we go, the Company will have secured the best available accommodation, services and back-up. This frees me to concentrate on what I enjoy most, which is finding really special wildlife experiences to share with our clients"
Stephen Mills
BBC Wildlife
"Thank you for all the organisation which gave us such wonderful and thrilling days in The Mara - a truly memorable experience.  We were so lucky all our sightings - the best view of leopard I have ever had.  The bonus was that beautiful black rhino - fighting fit and so close.  Of course, Simon's expert and enthusiastic guidance ensured the maximum benefit."
Angela
The Mara with Simon King