The polar bear (Ursus maritimus) is a carnivorous bear found largely within the Arctic Circle.   It is a large  marine mammal, even though they are mostly born on land and where they are seen by most people

Polar bears feast on seals and so most of their hunting is out on the sea ice. They roam over huge
expanses and adult animals can swim long distances when required to do so.  An adult polar
bear needs to kill between 50 and 75 seals annually to meet its energy requirements. He can however survive up to 8 months without eating.  He uses a variety of  methods to capture ice  seals, such as waiting patiently beside a breathing-hole in the ice or sneaking up on a seal hauled out on the ice.

A boar (adult male) weighs around 350–700 kg ,  while a sow (adult female) is about half that size. The polar bear is classified as a vulnerable species and for some time now, large scale hunting has raised international concern, although there is some evidence that controls and quotas have begun began to take effect.  They typically walk over 5000 km a year and can reach a speed of over 30km/h over short distances.

Most female polar bears reproduce for the first time when they are about five years old and have  one or two cubs who will remain with them for the next two and a half years.   She then will have cubs about every three years for the remainder of her life.  Most cubs are born around New Year’s Day, weighing only a little more than half a kilo, (the weight of an adult guinea pig). However, they gain weight quickly drinking the fat-rich milk their mother provides. 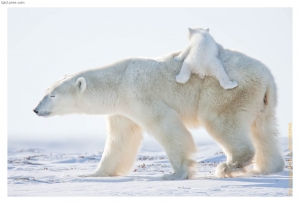 They continue to represent a key figure in the material, spiritual, and cultural life of Arctic indigenous peoples, and polar bears remain important in their cultures.

Where to see Polar Bears in the wild

Churchill in Canada – this is ideal for close-up almost guaranteed polar bear watching but this is viewing polar bears close to human habitation and in a semi-urban environment.  You view polar bears from caged lorries and the bears are semi habituated and will climb up the side of vehicles. It is a tourist attraction. Sadly this gets bears into human / wildlife conflict situations where bears are caught to prevent accidents, and it is most definitely not a wilderness experience.  It is very easily accessible from hotels.

Spitzbergen (also known as Svalbard) in Norway – a truly wild experience where you see polar bears far from any human habitation. You reach deep in to bears natural environment  on adapted research ice-breaker boats and viewing is done from the boat, in zodiacs and on foot. Only a few boats cruise this remote territory and you are guaranteed an authentic wild Arctic experience. Polar bear sightings cannot be guaranteed but if you take a cruise around the north of Svalbard in late June you are almost certain to see bears, as well as a whole array of wonderful Arctic wildlife. To participate in such a wilderness expedition requires a sense of adventure and a reasonable level of fitness.  To appreciate all the wildlife the Arctic has and to understand the behaviour of polar bears and the challenges they face we suggest you book a trip on which includes a private naturalist. To access such a pristine wilderness area involves one or two days travel and overnighting in Longyearbyen.  Private Naturalist led Polar Bear Expedition 13 – 22 June 2016

""Just wanted to drop you a quick line to say how very much I enjoyed painting with Pete in Havana.  I loved it all, the City, the painting, the company, the Mojito's and the food, and it was great to have Jacqueline there organising us all. Many thanks and I hope to take part again next year.""
Karen
Painting in Havana with Peter Brown PNEAC, RBA, PS, ROI, RP
""I want to let you know that the workshop with Ken Howard in Santorini was simply the best workshop I have ever attended.  I was deeply inspired and impressed by Ken.  The group was a pleasure.  I hope this workshop will be repeated again."   "
Setsuko
Paint in Santorini with Ken Howard RA
""Our group is led by Professor Claudio Sillero....his decades of experience in this region and his hardy colleagues, guarantee sightings of wolves  They do not disappoint." "Next we climb up and across the Sanetti Plateau through unmatched beauty in every direction.  Small klipspringer, antelopes and hyrax, ( a pint-sized relative of the elephant), dot the hillsides.  our camp site is magnificent!  It is surrounded by towering basalt formations the locals call 'the soldiers.'  ....Can any place be more perfect?" "Our successful adventure is coming to a close, but we have been fortunate to site 30 wolves in 11 different packs, which equates to 10% of all the wolves living in the Bale Mountains National Park." "
Nancy Gibson
Wolf Watching with EWCP