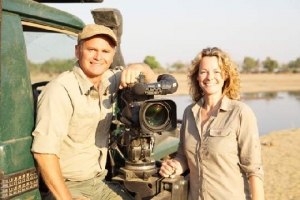 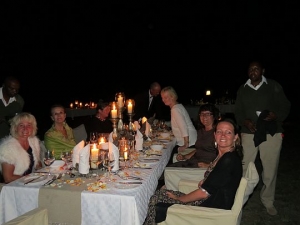 The scene is set….. a wonderful black tie bush dinner on the final evening of our amazing safari in the Masai Mara, Kenya, hosted by Simon King. The party swap stories and recall their personal highlights of this amazing safari experience; lots of big cats – lions, cheetahs, leopards, hyenas devouring their kill on the banks of the Talek river, a lion roaring as they sat out under the starlit African sky, the elephant that slept in camp one night, and the lion waiting and watching just 200 yards away as the camp was being dismantled on their final morning. 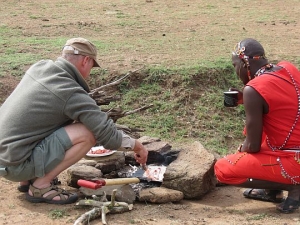 But it was all over too soon and time to leave for home. No more Simon cooking bacon, bush-tucker style on a spade for us. Simon bid farewell to his guests in Nairobi and then took a flight to Luangwa in Zambia, where he immediately began his next adventure; filming the ultimate African bush battle for survival.

It hasn’t rained in South Luangwa since April. Vast herds of elephants and buffalo, hippos and zebra weaken as they search for food. For their predators, it is the complete opposite, lions, leopards and wild dogs are in top form, ambushing weakened prey at will.

October marks the end of the dry season and it’s a critical time of year for African wildlife. When the rains come, tables are turned and it is the turn of these predators to go hungry.

Africa 2013: Countdown to the Rains, is a fast turnaround series that is shot and transmitted as the long dry season comes to an end. A series of 75 cameras rigged at strategic points will capture the gripping wildlife stories. Thermal and infrared cameras will follow all the action, wherever and whenever it occurs.

With the help of two specialist wildlife teams and animal behavioural scientists, Kate Humble and Simon King will explore and analyse the amazing footage, bringing us compelling viewing.

It’ll be good to see Simon back onTV and working with Kate Humble again, and wonderful to see natural history portrayed at its best – witnessing raw wildlife encounters.

It is a 3 part series starting this Sunday, 3 November at 8pm on BBC2.

Wildlife encounters with Simon King are above and beyond the ordinary safari.

""Ken was so kind, helpful and enormously interesting to be with. I know I have gained a great deal from the experience of some of his incredible wisdom and insight and having the privilege of working alongside such a great artist""
Ali
Paint in Santorini with Ken Howard
""We had so many different experiences, the accommodation was all excellent and very varied.  Our viewing of the wildlife was exceptional, and we all managed to complete several paintings and sketches of animals, birds and landscapes.  As always, Hazel was an inspiring teacher."  "
Eileen
Paint in East Africa with Hazel Soan
""Just wanted to drop you a quick line to say how very much I enjoyed painting with Pete in Havana.  I loved it all, the City, the painting, the company, the Mojito's and the food, and it was great to have Jacqueline there organising us all. Many thanks and I hope to take part again next year.""
Karen
Painting in Havana with Peter Brown PNEAC, RBA, PS, ROI, RP