Home / News / Brown Bears & where to watch them in the wild

Brown Bears & where to watch them in the wild

The Brown Bear (Ursus arctos), is one of the largest carnivores living today, and can grow to a huge size, males up to 350kg, females to 200kg. There have been sightings of even larger brown bears, one weighing 480kg was captured in Eastern Europe.

On average, adult males are around 10% larger than females but sizes vary according to the location of the species. They stand anywhere between 5 and 8 feet, or 1.5 to 2.5 metres. The world’s largest brown bears are found in coastal British Columbia and Alaska.

Despite their enormous size, brown bears are extremely fast and can achieve speeds of 30 mph.

They are part of the Sloth or sleuth group.

The coat of this species is usually a dark brown colour, but it can vary from almost black to a cream shade depending largely on their habitat. 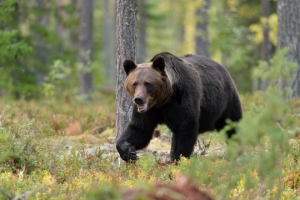 How many Brown Bears are there in the wild?

Across the world there are estimated to be above 200,000 brown bears. Russia has the largest population, thought to be over 100,000.

Where are they found?

Brown bears can be found in many habitats across the continents of Europe, Northern America and Asia. The habitats they inhabit are truly diverse and range from the edge of deserts to mountainous forests of Europe and Siberia through to the extreme conditions of ice fields. It is the most widely distributed bear in the world. Wherever they live, their main requirement is a habitat which provides cover where they can shelter in daylight hours.

What habits do Brown Bears have?

Brown bears  tend to be solitary animals, except for females and their cubs. They do occasionally gather together and have been observed at  Alaskan fishing sites when the salmon swim upstream for summer spawning.

Brown bears are omnivores and regularly forage in the morning and evening. They spend most of the day resting, sheltered beneath dense vegetation. They may venture quite far, sometimes up to hundreds of kilometres during the autumn to feed themselves.

They hibernate during the winter months. The length of hibernation depends on the location. In some of the warmer southern areas, hibernation is short or may not occur at all. Bears pick a safe and often sheltered spot for their hibernation and their “dens” may be re – used  over the years. 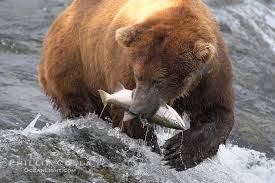 What do they eat?

Brown bears are omnivorous, and their diet varies with the season. During the summer they are partial to berries and apples, whilst in Autumn they might choose nuts and plums.

All year round they eat roots, insects, mammals and reptiles. In Alaska, grizzlies feed on salmon in the salmon spawning season. Here dozens of bears congregate to feast on the fish which gives them the fats and fish oils they need to get through winter.

In preparation for hibernation, a single brown bear may eat as much as 40 kilos of food each day, and its weight can double at this time.

What is the Life Cycle of Brown Bears?

Brown Bears mate from May to July, and a gestation of 180 to 266 days follows, with births occurring from January to March, usually while the female is still in hibernation. She generally has two to three cubs. She will  breed again 2 to 4 years later. 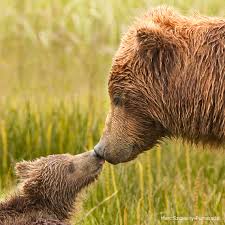 Cubs are born blind, naked and weighing only 340-680g. They grow quickly, reaching 25kg by 6 months.  Cubs usually remain with the mother until they are 3 or 4 years old. Growth continues until they reach about 10-11 years old. They mature sexually between 4-6 years of age. In the wild, the brown bears can reach 20 to 30 years of age.

Despite this long life expectancy, most brown bears die very early. Their average life span in the wild is around 25 years.

They can be dangerous to humans, particularly if they are surprised or if a person gets between a mother bear and her cubs.

What are the main threats to Brown Bears?

At one time they were hunted for their meat, skins and hides. Their gall bladders fetch high prices on the Asian markets as aphrodisiacs. They are also hunted as big game trophies, as well as being sought for their meat and hides.

Destruction of habitat has threatened bear numbers to varying degrees across their range. The WWF gives an example that Grizzly bears are now found only in 2% of their former range. Logging, mining, road construction and other developments have reduced available bear habitat and contributed to the decrease in bear populations.

In some countries, conflict between man and bears has caused problems, particularly in areas where bears can interfere with livestock, orchards, water supplies and waste bins. 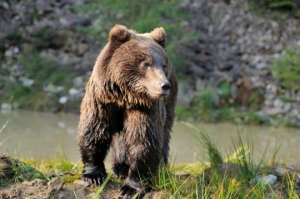 Where to watch Brown Bears

The best places to see Brown Bears in the wild is in Alaska and on the Finnish-Russian border.  Guns are not allowed near the Russian border so the bears are under minimal threat. The remoteness of the area means that your bear watching experience is as wild as it can be. From the safety of hides (reached only on foot) you can observe bears all through the night if you plan your visit during the months of the midnight sun.

The other advantage of watching Brown Bears in Finland is that you can easily and quickly reach the prime bear watching sites from Europe and a 3 night trip is very feasible and will be an action packed and a really rewarding  wildlife experience.  Combined with nesting Golden Eagles and White-tailed Eagles it offers a fantatsic wildernss adventure. Visiting Alaska requires much more time and is more expensive. The ultimate trip would be to travel as part of a handful of people with your own private naturalist who can draw out the best from the local guides and explain the bear behaviour as it unfolds before you.

We are offering a trip to watch Brown Bears and Golden Eagles in a remote region of Northern Finland, which is well known by Finns as the prime location if not the best, because it is not visited by regular tour groups. Professional naturalist, Stephen Mills MA (Oxon) will join just 4 – 6 guests.  You’ll stay in a tradional log cabin with just 8 ensuite rooms, home cooking and a ‘smoke’ sauna. In early June you’ll be able to watch Brown Bears throughout the night if you so wish. 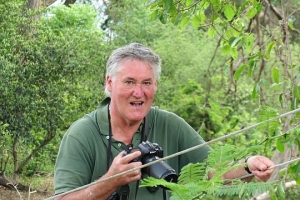 ""Our group is led by Professor Claudio Sillero....his decades of experience in this region and his hardy colleagues, guarantee sightings of wolves  They do not disappoint." "Next we climb up and across the Sanetti Plateau through unmatched beauty in every direction.  Small klipspringer, antelopes and hyrax, ( a pint-sized relative of the elephant), dot the hillsides.  our camp site is magnificent!  It is surrounded by towering basalt formations the locals call 'the soldiers.'  ....Can any place be more perfect?" "Our successful adventure is coming to a close, but we have been fortunate to site 30 wolves in 11 different packs, which equates to 10% of all the wolves living in the Bale Mountains National Park." "
Nancy Gibson
Wolf Watching with EWCP
""Just wanted to drop you a quick line to say how very much I enjoyed painting with Pete in Havana.  I loved it all, the City, the painting, the company, the Mojito's and the food, and it was great to have Jacqueline there organising us all. Many thanks and I hope to take part again next year.""
Karen
Painting in Havana with Peter Brown PNEAC, RBA, PS, ROI, RP
"I've done lots of trips tour guiding for Spencer Scott Travel (Cuba, Peru, South Africa, Botswana, Uganda) and they have all been of the highest order, well planned, great itineraries, excellent support and clients always totally satisfied. They are a total pleasure to work for and I have loads of great memories to treasure as a result. Check them out if you want something special."
Chris Packham
Wildlife TV presenter, photographer & author