Every picture tells a story ……..

Photos from a recent 5 day safari in the Masai Mara Reserve, Kenya.

January is supposed to be in the dry season. It is low season for visitors meaning a safari is largely devoid of people. The wildebeest have been and gone,  and are making their way to their preferred calving place in The Serengeti, but the Big Cats, which The Mara is so famous for are always there. . The Mara is lush and very beautiful and there is plenty of action to see and enjoy. 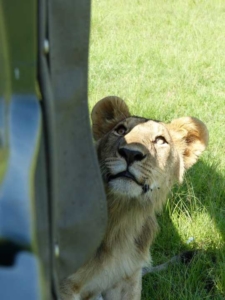 During 5 days quality wildlife viewing  we encountered 53 lions, 2 cheetahs and leopard with a kill, plus a plethora of other animals. What’s more, we were able to sit and observe the animal behaviour for as long as we wanted with no other vehicles in sight. Each day we returned to see how the different prides of lions were doing and our leopard with her kill. 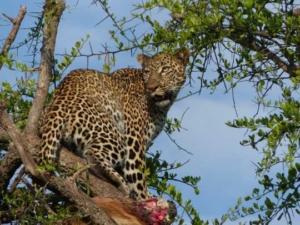 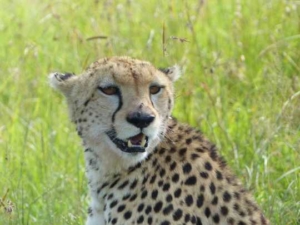 The Big Cats in The Mara are so used to safari vehicles that if you sit, wait and watch quietly you can have really close encounters with the cats. We had lion cubs playing around tyres and crawling under our vehicle to find shade before the rest of pride decided it was time to move on. So many people say lions only sleep but we saw large prides on the move and two male lions who were staking out a dead elephant. 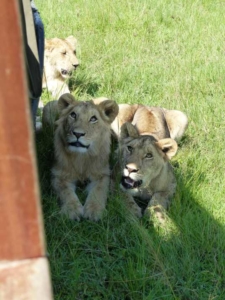 Normally lions have to defend, share or even lose a meal to hyena, vultures and jackals – the three main scavengers on the plains but this meal was too big for the lions to be too bothered and let the jackals enjoy a dinner too. Here you can see the jackals helping themselves inside the carcass. Within a day the whole carcass was gone.We believe the elephant died of natural causes. 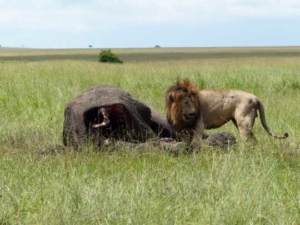 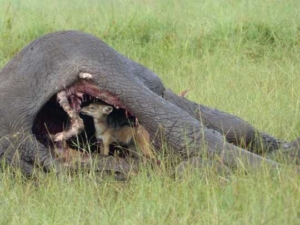 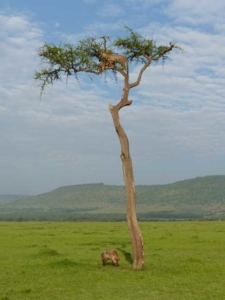 A young female leopard (about 2 years old) called Ann decided to settle just outside our camp and this is where early one morning we found her up a tree with her kill. She had not chosen the best tree and soon the hyenas were on her tracks. Over the next couple of days we watched her move the kill to a better tree and an aborted warthog kill, which was intercepted by the hyenas. She is young and has a lot to learn, but Ann is a beautiful leopard and with a shy male leopard in the vicinity we can expect her to have some cubs in a 12 – 18 months time. We will certainly be keeping a watchful eye on Ann when we return in October. 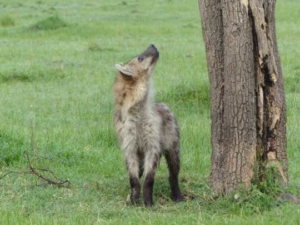 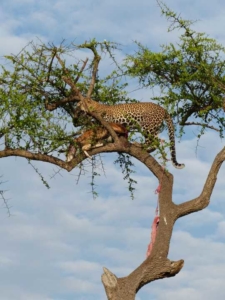 We were really privileged to spend a long tie with our cheetah sightings. They were two different cheetahs but both walked alongside our vehicles so we cold get excellent came close images. It is always a question one asks oneself  – which is more beautiful a leopard or a cheetah? 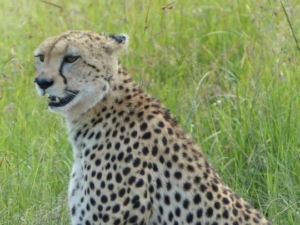 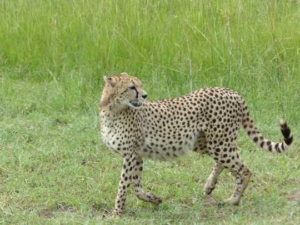 We were staying in our favourite camp in the Masai Mara – it has a superb location overlooking The Mara River and The Marsh, it is discreet and very private.  We are treated as VIP’s and everyday there are wonderful treats and surprises for us. Above all we are treated like family. 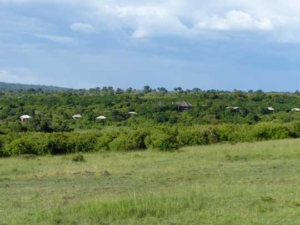 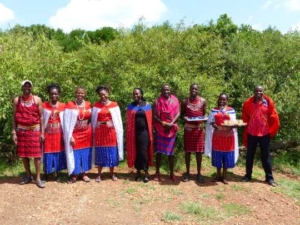 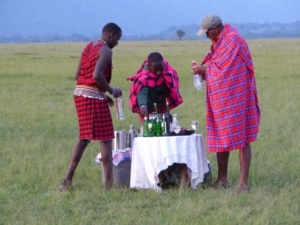 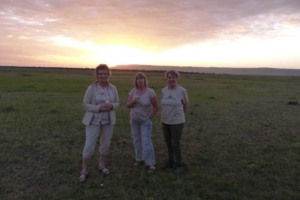 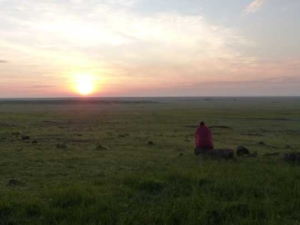 There is always some thing to capture your attention in the Masai Mara – wonderful cloud formations, sunsets and silhouettes. 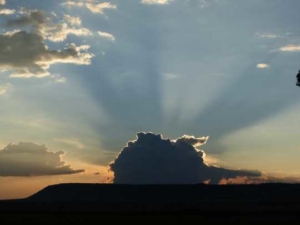 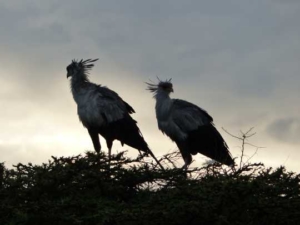 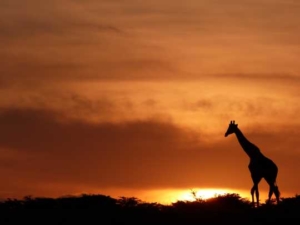 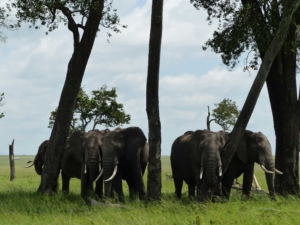 We saw lots of beautiful herds of elephants and buffalo, many warthogs (often too quick to photograph), topi or ‘blue jeans’ as they are sometime called, impala, yellow billed storks and much more. 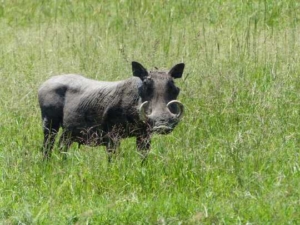 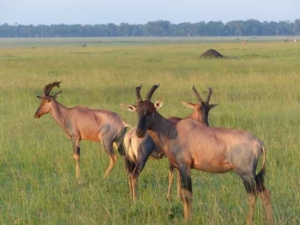 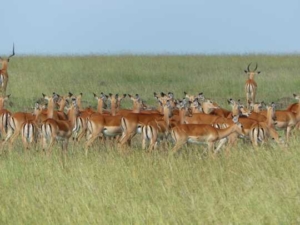 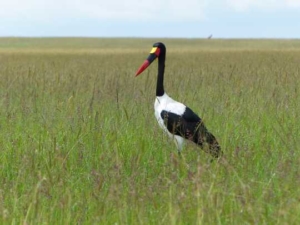 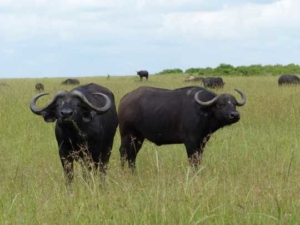 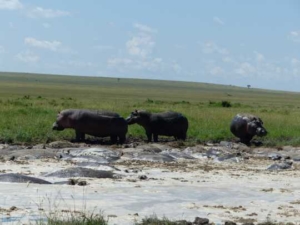 A memorable but highly unpleasant experience was the overcrowded and over-fouled hippo pool! These are not boulders in the scum but hippos! 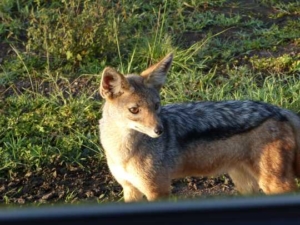 Jackals are normally nimble footed and avoid close encounters with humans but this little one was very curious and stood next to our vehicle eyeing us up. . 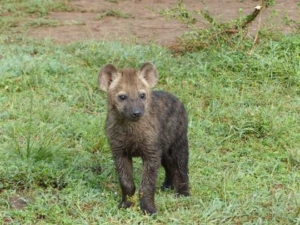 On the last morning we visited a den near camp where there were some cute hyena cubs, who we hope to check up on in October when we will be back in The Mara for more special wildlife moments.

What a great privilege.

This is why the Masia Mara is one of the best places on earth to see wildlife.

"" Thank you for organising the extra flights and accommodation etc... The trip was a success for me. Eileen was the most thoughtful and hard working attendant/guide - she tended to our every needs - nothing was too much bother to her. Lachlan Goudie was such a gentleman. He was enthusiastic, kind and so very generous of advice and inspiration. He cheered us up and gave us hope when we were struggling with our work. We all loved him and are in awe of his beautiful water colours and gouache paintings.  Thank you for everything.""
Tess
Painting in Morocco with Lachlan Goudie ROI
""Ken was so kind, helpful and enormously interesting to be with. I know I have gained a great deal from the experience of some of his incredible wisdom and insight and having the privilege of working alongside such a great artist""
Ali
Paint in Santorini with Ken Howard
""Our group is led by Professor Claudio Sillero....his decades of experience in this region and his hardy colleagues, guarantee sightings of wolves  They do not disappoint." "Next we climb up and across the Sanetti Plateau through unmatched beauty in every direction.  Small klipspringer, antelopes and hyrax, ( a pint-sized relative of the elephant), dot the hillsides.  our camp site is magnificent!  It is surrounded by towering basalt formations the locals call 'the soldiers.'  ....Can any place be more perfect?" "Our successful adventure is coming to a close, but we have been fortunate to site 30 wolves in 11 different packs, which equates to 10% of all the wolves living in the Bale Mountains National Park." "
Nancy Gibson
Wolf Watching with EWCP