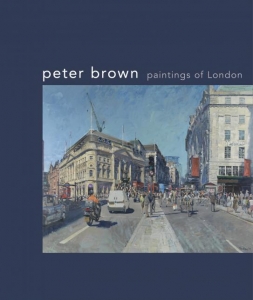 Messum’s Gallery in the heart of London’s Mayfair plays host to the largest exhibition of artist Peter Brown’s London Paintings. The show ‘Paintings of London’ is set to run up until February 12th and features a selection of Peter’s best work, focusing on his favourite areas of the capital including Piccadilly & The West End.

Known as Pete The Street, Peter Brown is a British figurative artist famed for his love of ‘plein air painting’ out in the street, come rain or shine. His paintings capture the hustle and bustle of London’s streets from a unique viewpoint, through a variety of seasons and lighting conditions – making this exhibition a must see.

Peter Brown is hosting an exclusive holiday painting in Florence during September. Ideal for experienced to intermediate level painters, work alongside Peter and gain a special insight into his methods.

Paint with Peter Brown in Florence

From London To Venice – Ken Howard 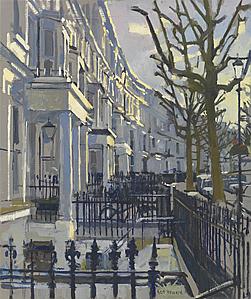 Ken Howard OBE RA is a highly acclaimed figurative artist and member of the Royal Academy of Arts.  Born and raised in London – his latest exhibition ‘From London to Venice’ celebrates his love of his two favourite subjects, London and Venice. Hosted at the Richard Green Gallery in Mayfair, the exhibition showcases 50 of Ken’s recent works – with landmarks Big Ben, Westminster Abbey and the River Thames all featuring alongside the beautiful canals and architecture of Venice. ‘From London to Venice’ will be running until February 6th, so don’t miss this chance to see some of Ken’s finest work.

Join Ken Howard as he travels to Bruges this summer to paint on location in the ‘Venice of the North.’ Be inspired by Ken on this wonderful painting holiday which is a unique opportunity to paint with one of the world’s leading figurative painters.

Paint with Ken Howard in Bruges

Written and presented by Lachlan Goudie 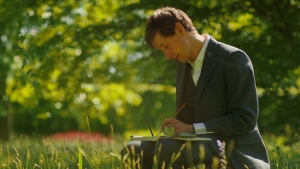 In this four part television series currently showing on BBC Two, artist Lachlan Goudie presents the story of Scottish art and its global influence, from early Neolithic times right up to the present day. Seen through the eyes of an artist, Lachlan takes the viewer on a fascinating journey, beginning in Orkney exploring the ancient Ring of Brodgar, traveling across the continent to France and Italy, examining key influences and how Scottish artists have been pushing the boundaries of art itself across the world for over 5000 years.

If you’ve been inspired by watching The Story of Scottish Art – find out how you can paint with Lachlan Goudie on a special painting holiday he is hosting in the South of France this May.

Paint with Lachlan Goudie in the South of France

""Just wanted to drop you a quick line to say how very much I enjoyed painting with Pete in Havana.  I loved it all, the City, the painting, the company, the Mojito's and the food, and it was great to have Jacqueline there organising us all. Many thanks and I hope to take part again next year.""
Karen
Painting in Havana with Peter Brown PNEAC, RBA, PS, ROI, RP
""We had so many different experiences, the accommodation was all excellent and very varied.  Our viewing of the wildlife was exceptional, and we all managed to complete several paintings and sketches of animals, birds and landscapes.  As always, Hazel was an inspiring teacher."  "
Eileen
Paint in East Africa with Hazel Soan
"Thank you for all the organisation which gave us such wonderful and thrilling days in The Mara - a truly memorable experience.  We were so lucky all our sightings - the best view of leopard I have ever had.  The bonus was that beautiful black rhino - fighting fit and so close.  Of course, Simon's expert and enthusiastic guidance ensured the maximum benefit."
Angela
The Mara with Simon King